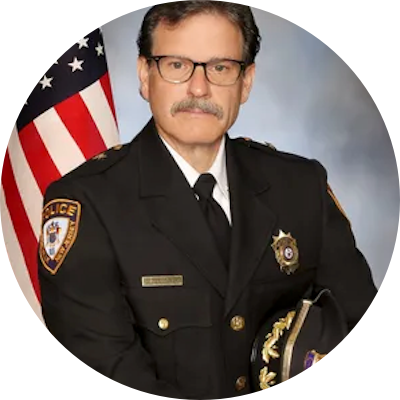 Chief Zebrowski, a graduate of the Union County Police Academy is in his 25th year of service with the department. During his career the Chief served in both the Patrol and Detective Divisions. Most notably, his last assignment was Captain of Detectives.

The Chief is a lifelong resident of Sayreville and graduated from Sayreville War Memorial High School. He attended Rutgers University where he received a Bachelor of Science degree in Political Science. In addition, the Chief earned a Juris Doctorate in law from Seton Hall Law School and has been admitted to practice in New Jersey and Pennsylvania.

Chief Zebrowski is married and he and his wife, Kim, have three children; Matthew, Jonathan and Jessica. The Chief has been very active in the community as has served on various committees; including the Planning, Board of Adjustment and Recreation boards, as well as, being a member of the Sayreville Board of Education. He has also served as the President of the Our Lady of Victories Athletic Association and has been a coach in such sports as baseball and basketball for over the past ten years.

The Chief has several hobbies and will be participating in the Special Olympics Torch Run in June and the Tour de Force bicycle rally in September.

We have all heard the age-old question concerning leadership. Are leaders born or are they made? Unfortunately, in today’s challe…