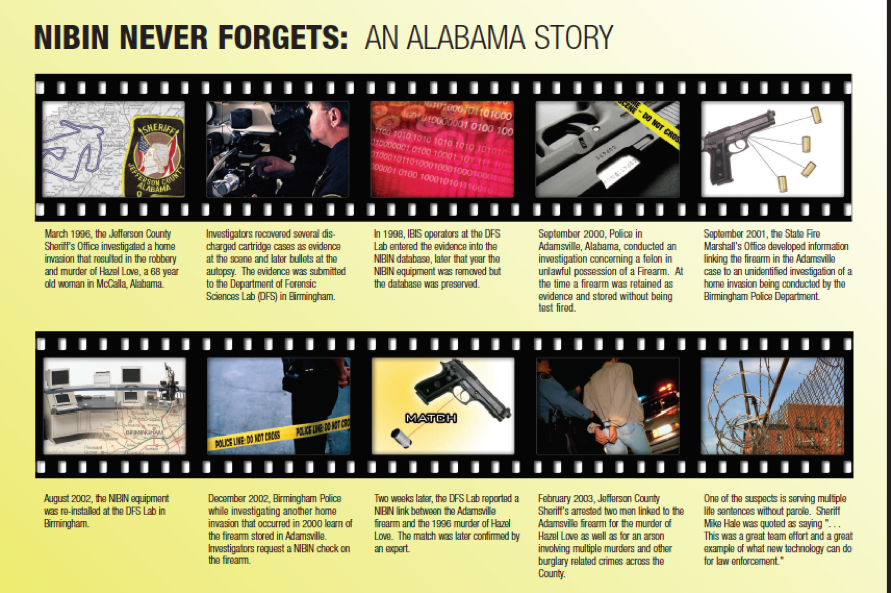 Back in 2006, I went searching for a success story about the use of the ATF National Integrated Ballistic Information Network (NIBIN) in solving crime.

I was looking for a story that hit upon a couple of key points that I believe exemplify NIBIN’s substantial and sustainable law enforcement and public safety benefits.

I was looking for a case in which the criminals were mobile and the evidence of their crime was scattered across different jurisdictions. I wanted to make the point that even widely separated police agencies are co-dependent upon each other to share their crime gun intelligence or else vital crime solving and prevention information could “fall thru the cracks” and be missed.

Most importantly though, I wanted to find an example of how an unsolved murder not only impacts the victim, but the family members left behind and their neighbors as well. A case gone cold for a period of time could lead a surviving family member to believe that justice delayed is in fact justice denied.

I would find all of which I had been seeking in the Love case, here is the brief:

In March 1996, the Jefferson County Sheriff’s Office investigated a home invasion that became a robbery resulting in the murder of Hazel Love, a 68-year-old woman in McCalla, Alabama.

Investigators recovered several discharged cartridge cases at the scene and, later, bullets at the autopsy.

Birmingham. IBIS operators at the ADFS lab entered the evidence into the NIBIN database.

The NIBIN search did not produce any potential leads and the case essentially grew colder with each passing day.

In September 2000, police in Adamsville, Alabama, about 20 miles from McCalla, conducted an investigation of a felon who was in unlawful possession of a firearm. At the time, a firearm was retained as evidence and stored in the police department’s property room.

In December 2002, Birmingham Police investigating a home invasion learned of the firearm stored in Adamsville. Investigators requested a NIBIN check on the firearm. Two weeks later, the ADFS Lab surprisingly reported that there was no NIBIN link to the Birmingham home invasion but there was indeed a link between the Adamsville firearm and the 1996 murder of Hazel Love in McCalla. The match was confirmed by a firearm expert.

In February 2003, the Jefferson County Sheriff’s Office arrested two men that were linked to the Adamsville firearm for the murder of Hazel Love as well as for serious crimes across the county. One of the suspects is now serving multiple life sentences without the chance of parole.

I  wrote about the Love case in my book, “The 13 Critical Tasks: An inside-out approach to solving more gun crime”.

I spoke about it. I posted about it on social media. I included it as a lesson learned in over one hundred training seminars that I delivered across North America and the other continents as well.

Around 2007 or so, I was working one night at my home office desk and I received an email that I will never forget. An email that for me, and for many of my law enforcement colleagues, still brings a smile to our faces every time it's discussed. It’s the kind of thing that makes the job worth doing.

The email was from the granddaughter of Hazel Love. Jennifer found my email in one of my postings on the Love case. She was writing to say thank you to NIBIN, the users, the ATF, the Sheriff’s Office, and Forensic Technology Inc., the company that invented and produced the technology that formed the ballistic heart of NIBIN.

She also expressed how grateful she and her mother Judy were to finally see justice served and for the resolution that they and their families now have.

Jennifer became a NIBIN advocate, she expressed her feelings in letters to certain Members of Congress. Here are some snippets from her letters:

“She was not shot just one time, she was shot numerous times. The killers wanted to make sure there were no possibilities of an eyewitness. My grandmother was gone and this is when “our lives changed forever.”

“ . . . if it weren't for the ATF's NIBIN (National Integrated Ballistics Information Network) program, my grandmother's case would probably not had gotten solved.”

“My family like all the families in the United States rely on the choices and decisions made by our elected officials to provide law enforcement with the tools that they need. For the sake of your family and other families across the United States seeking peace and closure, I ask you, in honor of my grandmother, Hazel Mae Love, that you continue to fund and support projects like NIBIN.”

“For you see, if it weren't for NIBIN, we would have an un-ended chapter in our [family’s history] book.”

As I write this, I am smiling. Notwithstanding, I’m also a bit sad to think of what Jennifer, her mom Judy, and the rest of the family must have been feeling as the calendars changed six times before this case was solved.

I couldn’t blame them if they thought that justice had passed them by and that it was something that other people got but not them.

I couldn’t blame them if they were critical and somewhat embittered over the fact that for a couple of those years the key piece of evidence sat on a shelf in a police property room, 30 minutes from where the crime had occurred yet investigators had no clue.

No Jennifer and Judy never expressed any of that negativity. In fact, Judy recently posted a deeply faith-based wish for all police and victims of firearm-related violence: “Praying that more and more police departments will use NIBIN”.

What else would you expect - from a case named Love?